Children Unable to Speak: Therapy Can Help Those Who Suffer From Selective Mutism 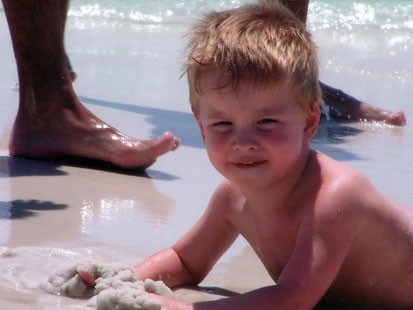 (for the full article, please visit ABC News)What if a teacher told you that your child, talkative and outgoing at home, was not uttering a single word in school? Story Stutterers Speak Easier

For many parents, this is their reality — a child who is highly communicative in one setting but completely shut down in others. It’s called selective mutism, and while it affects around seven in every 1,000 children, there are many families who suffer with the disorder without any knowledge of how it can be treated. “20/20” followed two children who have faced the challenge of selective mutism and worked to overcome it.

Jacob Hanna of Fredericksburg, Va., is a personable 7-year-old boy with three younger brothers. Although he has always been verbal and articulate with his parents, John and Donna Hanna, they noticed what they now call a “Dr. Jekyll and Mr. Hyde” personality in their child. “It would be Jacob at home and then it would be Jacob outside of home,” said John.

At first his parents thought Jacob was like any normal shy child. “I didn’t see any big deal with it. I mean, so what. He was a little reserved when out in public,” said Donna. But once Jacob entered preschool, they realized his behavior was much more than just being shy.

Jacob’s preschool teachers told the Hannas that Jacob wasn’t speaking in class and didn’t seem to know his ABC’s. This was a frightening wakeup call, particularly since Jacob was an avid reader at home. Jacob also told his parents that he was having trouble interacting with other children.

“There were so many times that Jacob would say, ‘I don’t have any friends, Mom. No one will play with me,'” said Donna. Their otherwise outgoing child was mute outside the home. “It was like watching a mime,” Donna recalled. Jacob wouldn’t even laugh out loud or let people know if he was in pain. The Hannas tried every trick in the parenting book to get Jacob to speak, promising trips to McDonald’s and the toy store to coax him into saying sounds in public. When nothing seemed to work, John and Donna were wracked with guilt.

“I really got upset about it, and I thought man, this is my son, and I’m the loudmouth,” said John. “And why can’t I get my son to do the same stuff.”

It was clear that that Jacob wanted to be able to communicate but faced a terrible obstacle. Donna Hanna says her son told her that “my bones feel like glass, my skin feels like paper and my lips are glued shut.”

After many fruitless Internet searches, Donna decided to find out more about childhood anxiety, and soon found a link to www.selectivemutism.org. “I read the criteria and I said, this is it, this is him,” said Donna. “No one can tell me any different.”

She was right. Jacob was officially diagnosed with selective mutism. Donna said she was “very relieved” by the diagnosis. “I knew, okay, now we can do something to help him,” she said.

Help came in the form of Dr. Elisa Shipon-Blum, President of the Selective Mutism Anxiety Research and Treatment Center She understood the Hannas’ plight firsthand, because her own daughter had the same disorder.

“I had a beautiful little girl who was outspoken, bright, reading at home, inquisitive,” said Shipon-Blum. “And this same little girl would go out in public settings and literally shut down, and with other people act as if she didn’t know they existed, was almost in her own little world.”

She has made it her life’s mission to understand the mystery of her daughter’s selective mutism and save hundreds of others like her from a lifetime of silence. Her therapy practice, devoted solely to selective mutism patients, involves working intensely with the children, their parents and their schools.

Shipon-Blum defines selective mutism as “a social communication anxiety that renders a child silent due to profound anxiety. But in another setting they can be engaging and interactive and just as endearing as any other child.” She says that people often misunderstand the behavior as a child being stubborn, but she describes the behavior as being “stuck.” And to get “unstuck,” Shipon-Blum says, it is important not to focus on simply getting the child to talk.

“When the emphasis is on trying to get a child to speak, you’re actually reinforcing the anxiety. So these children just hear the word ‘talk,’ and their anxiety level goes up, because everyone around them is focusing on getting them to talk.”

Shipon-Blum says that each child is at a different stage in what she calls “The Social Communication Bridge.” Some children are completely non-communicative, while others are mute but can communicate nonverbally with gestures and nods. The biggest challenge is transitioning the child across the “bridge” from nonverbal to verbal communication.

How does one get the child to cross this bridge? Shipon-Blum says “it was really a matter of putting pieces together and learning that these children need to feel in control.” One helpful technique called “Ritual Sound Approach” teaches children to make sounds instead of saying full words, like “sss” for yes and “nnn” for no, and then shaping sounds into words.

They Can Get Over It

Six year old Laura Huggins is living proof that therapy can work for children like Jacob. Now energetic and talkative, Laura was once completely mute at school, even unable to ask to go to the bathroom. At one point, she stopped speaking to her own father for three months. “We saw this vivacious, funny, smart, bright child and our fear was that no one else was going to get to see this same child,” her mother Patti said.

After a year of therapy with Shipon-Blum, Laura’s world changed. In a remarkable demonstration of her progress, she was able to do an on camera interview with “20/20,” describing her experience with selective mutism. “It’s like when you are afraid to talk and it’s really scary when you’re in front of people,” she said. “And sometimes it’s hard to interact, like play with everyone.”

After nine sessions with Shipon-Blum, Jacob has already shown signs of progress. He has made a friend named Tony at school, with whom he is comfortable speaking, and he communicates in public today with more ease.

And as for Shipon-Blum’s daughter, she overcame her mutism and was able to lead her bat mitzvah in front of hundreds of people.

“I wish I had had a crystal ball that when she was four years of age and five years of age, that I could have known that’s what she would have become,” Shipon-Blum said.

But perhaps the most inspiring words for children like Jacob are from Laura, who tells children who are suffering with selective mutism, “I know that they will get over it. It might take a couple of years or something but they can get over it.”